A lot of Italian varieties share the same fate when it comes to missing their historical origins. Vermentino is like that. Although most suggest that the grape came from Gallura and spread in a circular motion in the middle ages, to me its highly unlikely this beautiful, uncomplicated wine would have begun its life in a little region in Sardinia,(its current ‘home base’).

Not romantic enough! There are other theories. The one that appeals to me most goes along the lines that Vermentino started its journey as a commercial wine in mainland Greece, as long ago as 2000 BC. (With this Greek heritage, it’s quite possible that its journey began even further back in time, to the Caucasus near Georgia and Armenia back in 4500 BC!).

This was when the first references were made to wine as a ‘social lubricant’. Nice term! Continuing the Greek theme, we note that in ancient times they founded over four hundred colonies in the Hellenistic period alone; including in Puglia, Sardinia, Basilicata and Sicily. The Greeks were well known for taking their favourite tipple with them, and so it was that Vermentino vines came to be planted in Italy.

The wine itself became particularly popular in the southern regions, which was where the Roman army tended to source their invasion kits – grains, vegetable seeds, grazing animals, etc – and vines for planting in their new environment). During the growth phase of the Roman Empire (around 100 to 20 BC), when France and Spain were settled, I’m guessing that’s when Vermentino went ‘offshore’. (In southern France in Provence and in the Languedoc-Roussillon where it’s still there, in the varietal name Rolle).

During the Dark Ages, Vermentino (and many other varieties) disappeared; but turn the clock forward thirteen hundred years or so, and the Spanish Hapsburgs reconquered Sicily (around 1500) - bringing back with them good old Vermentino. Spanish influence hung around Sicily, Sardinia and the southern mainland of Italy for over two hundred and fifty years in gentle sort of way, and Vermentino again thrived – mostly in Sardinia, Tuscany and Liguria.

As Europe headed towards the Napoleonic Age, Austria and France (of course Napoleon was more Italian than French in ancestry, spirit and even influence) replaced Spain in terms of influence down south and in the islands – and it seems they left without taking their Vermentino with them! In the last two hundred years or so, the variety has quietly emigrated from its two Italian regions – Sardinia/Tuscany with its more concentrated, sometimes oaked style, and Liguria, where it’s texture and body is very similar to Pinot Grigio –only the nose is different – chiefly to Australia United States.

Despite at times reading otherwise, I can say that di Lusso Estate produced the first commercial Vermentino; vintage 2003, from fruit grown by Bruce Chalmers in Euston (near Mildura).

Sangiovese......A grape with an 'interesting' history

Sangiovese is almost certainly the most popular Italian red variety in Australia - and in our di Lusso Estate portfolio. But it's not without a skeleton or two in the closet, and an interesting history. Read on!

Sangiovese is almost certainly the most popular Italian red variety in Australia - and in our di Lusso Estate portfolio. But it's not without a skeleton or two in the closet, and an interesting history. Read on!Navigating your way around the Sangiovese-Brunello-Montepulciano-Supertuscan Thing!

Working in the cellar door on any given Saturday, I’ll meet visitors who’ve been to Tuscany, or who worship Brunello, or who don’t know where Chianti fits into the landscape, or who think they know what a SuperTuscan is, or who think that Sangiovese is the grape from which the wine style Montepulciano Abbruzzo is made…and so on. Here how Italy’s most-grown grape hangs together – in the vineyard and in the bottle Sangiovese …the most important thing to remember about the grape variety Sangiovese has really only recently been definitively identified. (Previously, ‘Sangiovese’ was so commonly blended in both the vineyard and winery with other varieties – mostly with poor results- that its charm was not evident).

What has got the variety into ‘trouble’ at several levels is the fact that biologically the variety’s viticultural characteristics can vary enormously due to its sensitivity to location as to appear to be different varieties rather than just variants due to location (very similar to Pinot Noir in this respect). Over the past thirty years or so, many of the best producers have deliberately grown a range of different selections in their vineyards and this attention to detail has resulted in a massive improvement in overall quality. Brunello di Montalcino Nobody has done this more effectively than the good folk of this cute mountain village.

Although 100% Sangiovese, by a combination of careful clone and site selection, then longer maceration (fruit soaking to deepen the colour and extract tannins), the legal addition of 6% of concentrated must, and longer aging in both small oak barrels and in bottle before release, the region’s best wines taste quite different – deeper, richer, more opulent- than most of their fellow Tuscan styles. (One either believes in conspiracies or one doesn’t! For a number of years in the early part of this century the colour , concentration and fruitier flavours of Brunello were raising eyebrows. And true enough, in a scandal they called Brunello-gate, almost the whole Montalcino wine community; and in particular massive brands like Antinori and Frescobaldi, were found to be guilty of blending large amounts of ‘southern fruit’ with richer, darker characteristics that was illegal).

Overrated in my opinion; the sooner it becomes a wine more like the Chianti Classico Riserva, the better (see below!) Chianti and Chianti Classico Chianti is a region in central Tuscany. Nestled within it, between Florence and Siena, is the famous wine area known as Chianti Classico (declared by the Grand Duke of Tuscany as Italy's first legally protected wine region 301 years ago). Look for the Gallo Nero symbol, a black rooster inside a purple ring, on every bottle of Chianti Classico. These wines need only 80% Sangiovese to classify – although as the quality of the Sangiovese clones improve there is a growing number of 90 to 100% Classico wines.

There are three quality levels of Classico, depending on vineyard characteristics, age in barrel and time in bottle before release. SuperTuscan Wines In the 1970’s, the Italian government decided to do something serious to improve the quality of the country’s wines – and Tuscany’s in particular. So it undertook a massive audit of practically every vineyard in the country, discovering in the process that practically every vineyard contained an ‘assortment’ of varieties that did nothing to improve the quality of the wine. For example, most Tuscan vineyards contained a white variety Trebbiano and Canaiolo, a very mediocre red.

To bring a semblance of order to the industry, the authorities established an appellation system along the lines of that established in France, and urged all producers to work towards compliance. In parts of Tuscany, however, several leading winemakers had been experimenting with French varieties – in particular the Bordeaux varieties Cabernet Sauvignon and Franc, and Merlot, and they were very loathe to comply with the new ruling. Over a decade or so, they migrated many of their vineyards to an area around the village of Bolgheri,in western Tuscany where they produced wines that were smart enough to attract the attention of Robert Parker, at that time the leading wine advocate in the world.

Parker (who was renowned for goading the established wine order) is said to have exclaimed – after presumably awarding a whole bunch oh high ninety scores above those awarded to Bordeaux competitors that “These wines are not just Tuscan – they are SuperTuscan”. After that the marketing departments of the region over, the prices reputedly doubled, and a new wine ‘renegade style’ was born. An appellation not recognised by the authorities – to this day they carry an IGT (meaning, in a sense, Not Elsewhere Included), but created a new Italian wine style, one that is very sought!

We are often asked whether one should chill a red before serving, and the answer is generally yes, and here’s why:

Alcohol has a boiling point of 78 degrees, which is significantly less than water. Therefore, the higher a wine’s temperature, the more enhanced the alcohol volatility, resulting in an “alcohol burn.”

This alcohol burn is first noticed when assessing the aromatics, and depending on the temperature, it can completely overpower a wine’s bouquet.

On the palate, the alcohol cuts through the fruit and accentuates the perceived dryness, resulting in a wine that tastes “hollow, hot and dry.”

People generally prefer not to drink red wine in summer, yet if they chilled the wine down to 16-22 degrees before serving, they would find that red wine goes down perfectly well, even on the hottest of summer days.

Yet how cold can you chill a red wine?

Chilling a wine, white or red, will enhance the wine’s perceived dryness, bitterness or astringency.

Phenolic compounds called tannins are what cause this “dryness,” and they are in a much higher level of concentration in reds than whites – which is why whites can be served ice cold, whereas reds generally cannot be served less than 12 degrees.

That is unless the red wine has a low level of tannin. And if you have been to di Lusso during summer, you may have noticed that we serve our Sangiovese Rosso and our Barbera in ice buckets.

As a rule of thumb, you should serve your reds between 16-22 degrees. This would mean putting the bottle in the fridge for 10 minutes or so before serving.

And if you know that the wine has a low level of tannin, and perhaps even a small residual sugar, the wine can be chilled as low as you’d like.

So, if it’s summertime and you’re not a fan of whites, choose a light red that can be chilled, and you’ll be pleasantly surprised at how well a chilled red wine can complement a meal, or be enjoyed on its own on the hottest of Australian summer days. 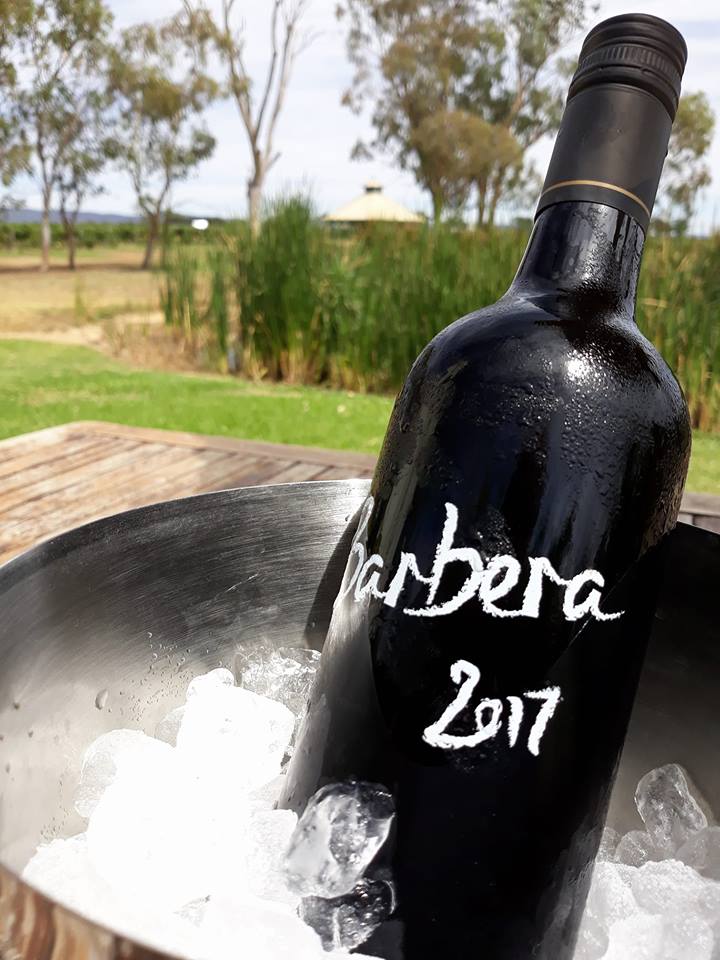