Figs in one form or another have been on the planet for at least eighty million years.

Of course, its easy to stick around if there are more than 900 different species of you, which there are... But botanists have ascribed their longevity more to their characteristics than their range of varieties. To botanists, the winning factors are their universally beautiful taste, combined with their ‘accessibility’. No tough skin, for example.

Figs attract the widest range of seed transporting animals in the whole of the plant kingdom. They are ecological linchpins, sustaining more wild birds and mammals than any other fruit tree on earth.

Figs are also the source of more myths and legends than any other fruit (or, more botanically correctly, a ‘false or multiple fruit', as the flowers and seeds grow together to form one gorgeous single ‘mass’). 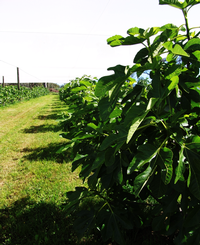 We grow five varieties of common fig at di Lusso Estate. All are female parthenocarpic varieties, and do not need pollination to produce fruit. So no need to deal with those little propagating wasps! Every year since 2003, my girls have performed the same ritual.

First, a showing of Black Genoa ripeness tells me it’s the second week of February.

A week later, it’s the turn of the White Adriatics (my favourite flavour, if I’m pushed to name one) to come to ripeness, with a more sustained season of six weeks or so. Meanwhile, my two lesser varieties Preston Prolific and Excel start moving.

Back comes Black Genoa with another season, then the mind-boggling champion of the orchard and juggernaut - Brown Turkey.

This lovely, patient variety is last to move, but more than makes up for this with a massive crop of around 1500 figs a tree that grows to the very top of the fig enclosure (or more than four metres). It is primarily the brown Turkey that keeps producing until the first frosts of May. 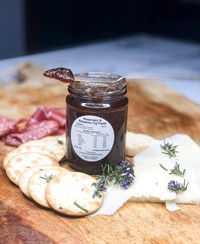 Steve Pavich, the Estate’s fig man, is out there almost every day, picking up to two thousand figs a day; sorting the crop between cellar door stock and crushed figs for ‘product’.

Product then moves under the control of Marcus Platt (one of several genii I’m blessed with at di Lusso) and who delivers a half dozen different flavours of fig pastes and vinaigrette (amongst much more farm produce) to the farmhouse door for our visitors.

And while all this is happening, the resident di Lusso spiders are ensuring the quality of the crop. I have never had to spray the figs in nearly twenty years, thanks to our golden orb weaver army that descends onto the trees as soon as the annual fig gnat plague begins early February.

These magnificent spider-hunters grow from 5 mm (.2 of an inch) to 5 cm (2 inches) in a season – and end up comprised entirely of exactly what I don’t want to find on the crop. (The only disconcerting feature is their habit of building their nets across the inter-rows of the orchard; meaning that driving the ride-on mower becomes a very interesting, and gastronomic experience!

Arneis. The Re-birth of a Classic

This variety, native to the hillsides of the Roero near Alba in Piedmont, was a classic white table wine variety at least as long ago as 1350 AD. Over the centuries since, with its characteristic of zero tannin and pleasant perfumed aromatics, it became used more as a blending agent to reduce the notoriously fierce tannins of Nebbiolo…in particular the tannic brooding styles from the villages of Barolo and Barbaresco.

In the last eighty years or so, however, its usefulness as a blending agent to modify the ‘aggression’ of Nebbiolo further declined. Producers started using other methods of bringing the drinkability of Nebbiolo forward by a decade or more – from up to twenty years down to around five or so. Only a couple of producers (including notably Vietti, another favourite of ours) didn’t lose faith in it as a varietal white table wine.


Grapes contain thousands of tannic compounds, known as phenolics. Most of the tannins are in the skins and seeds, and they are extracted during the winemaking process. They are an excellent natural preservative, and give the wine structure. But some are harsh and bitter; and some taste "green" or unripe. Techniques such as micro-oxygenation (for tannins) and malolactic fermentation (for harsh acidity) became standard in the industry in the second half of the twentieth century, and wholesale replacement of Arneis with Barbera and Nebbiolo occurred.

Folklore has it that Arneis retreated to two vineyards, when someone asked the question, “What do think this tastes like as a table wine?” And of course, as they say, the rest is history. 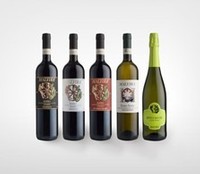 Our favourite Arneis producer, Malvira, has certainly taken advantage of this renewed popularity. Their winery, just a stone’s throw from the village of Barbaresco, produces FIVE different wine styles from the Arneis grape – a ‘regular’ dry white and a premium of the same vintage, a sparkling Arneis, an Arneis rosé and a vin santo style!

The fifty-meter strip of lawn from Malvira’s winery to the vineyard, when we visited there in 2009, was lawn. Today, their website features a luxury boutique hotel – complete with a magnificent swimming pool.

At di Lusso Estate, we planted just over an acre of Arneis on our Brambletyne site. Despite the variety’s reputation as being ‘tricky in the vineyard’, our experience is positive. And equally so in the winery, with a succession of good wines that provide the basis for our Vivo! bubbly.